Sparsha Trust is working to identify, rescue and rehabilitate children who are into begging and on the streets.

Sparsha Trust is part of an important RTE Task Force which is a coalition of NGOs working for children’s education rights.

Awareness about human rights violation, child abuse and trafficking is an important step towards taking action against the offenders and protecting children.

Sparsha Trust strives to bring about a change through advocacy, awareness programs, and implentation of policies related to child rights and protection in Karnataka.

Since 2015, Childline 1098 is being implemented in Bangalore Rural (Doddaballapur, Nellamangala, Hoskote, and Devanahalli) by Sparsha Trust along with two other NGOs.

ChildLine provides 24-hour, toll free, emergency phone service for children in need of care and protection. Any child or concerned adult can call 1098 any time of the day or night. We especially want to help children who are being treated violently or sexually abused by adults.

Each call centre has a team of trained youth who answer calls 24 hours a day. Within 60 minutes the team rushes to the child to resolve the crisis. This may involve going to a police station, the Juvenile Welfare Board to or a hospital. We remain in contact with the child until the crisis ends and then offer options for long term rehabilitation.

Sparsha Trust is working to identify, rescue and rehabilitate children who are into begging and on the streets by collaborating with the police, Department of Women and Child Development, Department of Education and Department of Labour.

Working in Bangalore North along with other NGOs, every two years there is a designated ‘rescue day’, during which Sparsha Trust identifies children who are begging on the streets and tries to rehabilitate them in their families or in childcare homes as per the guidelines.

We rescued 300 children in 2010 and about 295 children in 2013. We are actively engaging with the Department to identify children in need of care and protection, rescue children from begging and rehabilitate them as per the guidelines of the Juvenile Justice (JJ) Act. 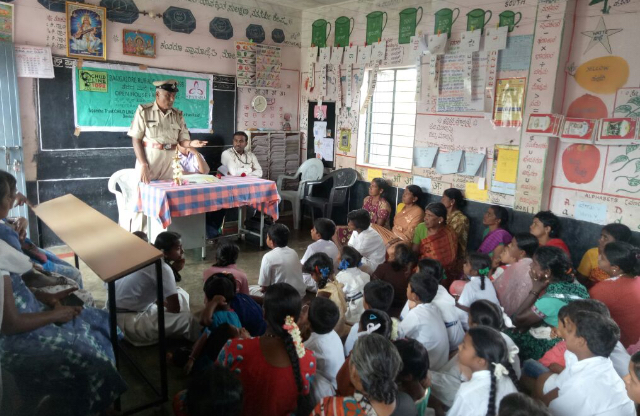 Since 2013, Sparsha Trust is part of an important RTE Task Force which is a coalition of NGOs working for children’s education rights. Given its rich grassroot level experience, Sparsha Trust has contributed to the Task Force by creating awareness about Right to Education (RTE) and has resolved cases related to violation of Child Rights.

Awareness about Human Rights violation, human trafficking, abuses on children and women is an important step towards taking action against the offenders and protecting children and women. As a district convener of the HTAC, in collaboration with International Justice Mission, the police and other NGOs, Sparsha Trust has created awareness about related issues since 2015 in Bangalore Rural. Cases are informed to the right authorities. We have also created awareness about the issues among all the Panchayats in Bangalore Rural Districts.  Since 2015, we are engaged in preventing human trafficking in various ways.

Apart from field-based activities, Sparsha Trust is striving to bring about a change at the larger level through advocacy, large scale awareness programs, strengthening of policies and their implementation related to Child Rights and its protection in Karnataka.

We request your participation in making this vision a success. Please make your contribution here.

Yes, I want to donate for the cause