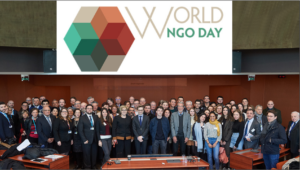 World NGO Day is observed on 27th February by many countries around the world. The UN marked World NGO Day for the first time in 2014. However, the United Nations General Assembly is yet to adopt it as the international NGO day, and probably for that reason, World NGO Day has not gained widespread popularity in India.

The concept behind World NGO Day is to ‘Celebrate, Commemorate and Collaborate’ all the NGOs – and the people behind it – doing commendable service across the world. Though not designated as the international NGO day yet, World NGO Day is today a global initiative in its own right. For NGOs around the world, World NGO Day provides an opportunity to share knowledge, showcase achievements, resolve common issues and form meaningful partnerships.

What is a non-governmental organization (NGO)?

The term ‘non-governmental organization’ was first coined in 1945, in Article 71 of the Charter of the United Nations. According to the UN, an NGO can be any kind of private organization that is independent of government influence and is not for profit.

The role of NGOs

As World NGO Day reminds us, NGOs wield a healthy influence in promoting equality, enabling development and improving the overall quality of life. NGOs are generally citizen-based groups, organized on local, national or international levels. They perform various services and functions, ranging from humanitarian assistance and poverty alleviation to community development and environment protection. Major sources of funding for NGOs are membership fees, grants from various institutions and governments, private donations and sale of goods and services.

The types of NGOs

NGOs are categorized based on their orientation, ranging from service-oriented to charitable, participatory and empowering. In a vast, developing country like India, NGOs have diverse roles to play, as they complement the Government’s efforts towards all-round social development. Their activities span various social and economic spheres, and broadly include:

Most Indian NGOs are born out of an individual’s, or a small group’s, resolve to make a difference to society. Over time, as they grow in size and stature, these organizations encounter a lot of challenges, both internal and external. To begin with, a majority of the NGOs have personnel who are totally committed, but inadequately qualified. This leads to many issues ranging from lack of proper direction to weak organizational capabilities and an inability to market themselves effectively.

NGOs in India must grapple with other challenges such as a lack of funds, limited public participation, declining volunteerism among the youth and a lack of credibility owing to misuse of funds by certain fraudulent NGOs.

You can help by fundraising for NGOs

Many of the challenges NGOs in India face would require government intervention to resolve. However, you can further the cause of NGOs by donating and raising funds for those organizations that are making a real difference. There are many NGOs that operate transparently, adhering to government norms regarding their finances and activities. By supporting such organizations, you can help expedite their efforts to transform our society. Consider this World NGO Day as just the right time to make a beginning.

Learn about the activities of Sparsha Trust.